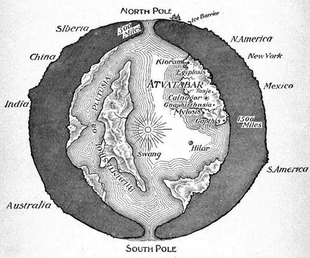 The Hollow Earth is a concept proposing that the planet Earth is entirely hollow or contains a substantial interior space. Notably suggested by Edmond Halley in the late 17th century, the notion was disproved, first tentatively by Pierre Bouguer in 1740, then definitively by Charles Hutton in his Schiehallion experiment around 1774.

It was still occasionally defended through the mid-19th century, notably by John Cleves Symmes Jr. and Jeremiah N. Reynolds, but by this time it was part of popular pseudoscience and no longer a scientifically viable hypothesis.

The concept of a hollow Earth still recurs in folklore and as a premise for subterranean fiction, a subgenre of adventure fiction.